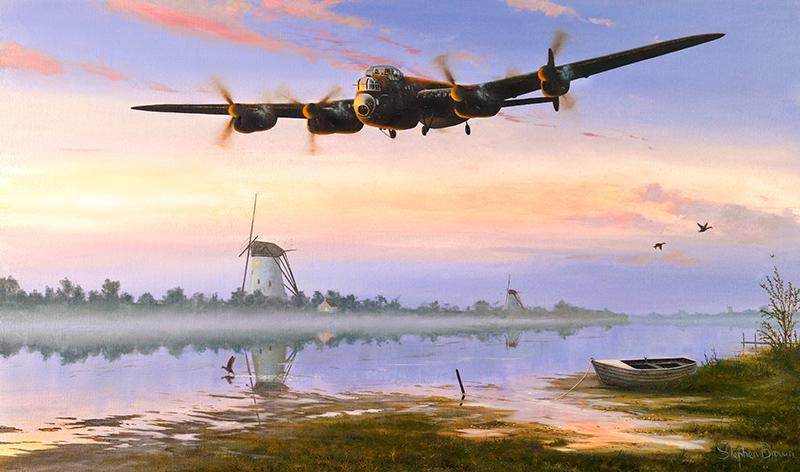 Original oil painting on high quality stretched canvas featuring the Dambuster Lancaster of Bill Townsend.
May 17th 1943: the thunder of Merlin engines fills the air, shattering the quiet of a Dutch dawn and causing wildfowl to scatter in alarm. Flying at tree-top height the Lancaster of Bill Townsend heads at full throttle towards the coast and the relative safety of the North Sea. This day the world will awaken to news of one the most daring and ingenious air raids of all time. RAF Lancasters of 617 Squadron, using the unique 'bouncing bomb' created by Barnes Wallis, had destroyed some of Germany's major dams, causing serious flooding of the industrial Ruhr and inflicting great damage on the enemy?' war effort.

Tasked with attacking the Ennepe Dam, Bill Townsend had to contend with low mist in the valleys and intense flak from enemy defences alerted by earlier aircraft. For his pilot skills, determination and bravery Bill Townsend was subsequently awarded the Conspicuous Gallantry Medal.

The canvas is signed on the back in permanent ink by:
George 'Johnny' Johnson DFM
Bomb Aimer on Dambuster AJ-T which attacked the Sorpe Dam
Squadron Leader L S 'Benny' Goodman
617 Sqn Pilot who took part in the Tirpitz raid.

This painting is presented professionally framed and ready to hang.