The FW190 A8 'Red 1' JG54 of Oberleutnant Hans Dortenmann at Velizy-Villacoublay air base just south of Paris in June 1944. Oberleutnant Hans Dortenmann joined the Luftwaffe quite late in the war but quickly made his mark and rose up through the ranks. After initial training with JG54 on the Eastern Front he achieved his first victory on 6 February 1944. When the unit transferred to the Western Front Dortenmann continued to add to his victories and in December 1944 took command of III./JG54. In March 1945 Dortenmann was appointed Staffelkapitan of 3./JG26 finishing the war with a total of 38 victories. Under the leadership of the highly respected Hannes Trauntloft JG54 became one the most feared and respected Luftwaffe fighter units amassing some 9,500 victories in total. Trauntloft's own green heart emblem was adopted as the Gruppe's symbol and they became known as the 'Green Heart Warriors'. 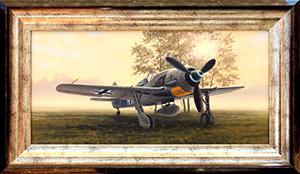