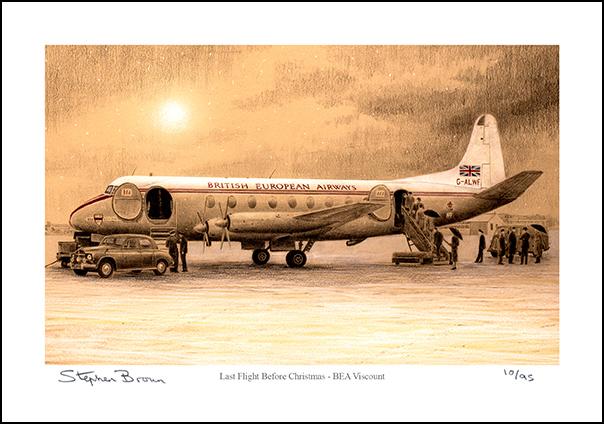 The image, taken from a pencil drawing by Stephen Brown, features passengers boarding a British European Airways Vickers Viscount at London Airport in the mid 1950s. The Vickers Viscount was he world's first turboprop airliner and one of Britain's most successful post war commercial aircraft. The Vickers Viscount flew with more than 60 operators but the principle one was British European Airways. At its peak BEA had a fleet of some 77 aircraft in service. Designed in the 1940s, the first Viscount entered service in 1953 and the type was still operating commercially well into the 1990s.

Printed on high quality, heavy-weight 400gsm card stock, each card is individually signed and numbered in pencil by the artist on the front in the lower white border. On the back of the card is a numbered Certificate of Authenticity that gives some information about the aircraft portrayed. Inside the card is left blank for your own message.

Available gift presented with a mount and clear wrap or mount and frame.

The mounted card will fit directly into any 10 x 8 inch ready-made frame - this is a widely available standard size. Alternatively they can be purchased from us ready fitted into a suitable frame - see options below. This card will also fit directly into a standard A5 size (8.25 x 5.75 inches) frame without needing a mount.
More info on framing for Limited Edition cards.